Chimpanzee advocates erected notice board near Chimpanzee Project in Georgia raise awareness of the plight of the 77 chimpanzees who live there. In this Humane Society of the United States (HSUS) facility, the 77 chimpanzees only have access to the outdoors for a few hours every three days. They spend the rest of the time languishing in concrete rooms. Campaigners set up the billboard on the weekend of September 25 to coincide with “Discovery Days” at Project Chimps, a two-day biannual open house that draws hundreds of visitors.

The notice board is the latest tactic in a campaign to force HSUS to improve animal welfare at Project Chimps. Chimps activists deserve better, progress for science, and in turn launched the campaign in July 2020, after Project Chimps filed a lawsuit against two whistleblowers who presented extensive evidence of animal cruelty. As part of the campaign, advocacy groups are calling on HSUS to transform the facility from a warehouse into a true sanctuary where chimpanzees spend their days in an outdoor habitat on the 236-acre forest property.

At Project Chimps, the Humane Society’s chimpanzee “sanctuary” in Georgia, the 77 chimpanzees spend most of their time in concrete rooms.

In July 2021, HSUS CEO Kitty Block acknowledged the need for additional yards, but she didn’t say when Project Chimps would create them. In response to advocates who contacted her about the deficiency, Block blamed “COVID” and “weather” for the delay, despite the chimps living in these conditions since 2016.

Response from Kitty Block, CEO of HSUS, to advocates calling for it to create additional classes at Project Chimps so that the 77 chimpanzees have daily access to the outdoors.

“How can HSUS blame COVID-19 for its inability to build construction sites for chimpanzees when Project Chimps was able to create elaborate hiking trails for visitors during the pandemic?” Said Lindsay Vanderhoogt, one of 22 whistleblowers who sent a letter to chairman of the board, Bruce Wagman, sounding the alarm on the poor welfare conditions. “The Chimps Project is meant to be a sanctuary, not a zoo, but it continues to prioritize entertainment for tourists over animal welfare. “

At Project Chimps, HSUS has prioritized amenities for tourists over some of the basic chimpanzee needs.

HSUS’s delay of several years in creating additional work sites does not only affect the 77 chimpanzees in the Chimps project; it also has an impact on the 120 retired chimpanzees from the New Iberia Research Center (NIRC) who are waiting to be sent to a sanctuary. In 2016, Project Chimps signed a contract with NIRC which stipulated that its 220 chimpanzees would be sent exclusively to Project Chimps. However, during a call on August 9, NIRC Director Dr François Villinger told TheirTurn’s Donny Moss that he would not transfer any additional chimps to Project Chimps until the sanctuary resolves the issues. ‘space. “Because HSUS drags its feet on the expansion of Project Chimps, NIRC chimpanzees are stranded there for an indefinite future,” Moss said. “This is particularly disturbing given the recent cases of animal cruelty uncovered at NIRC by the advocacy group Stop Animal Exploitation Now (SAEN).” 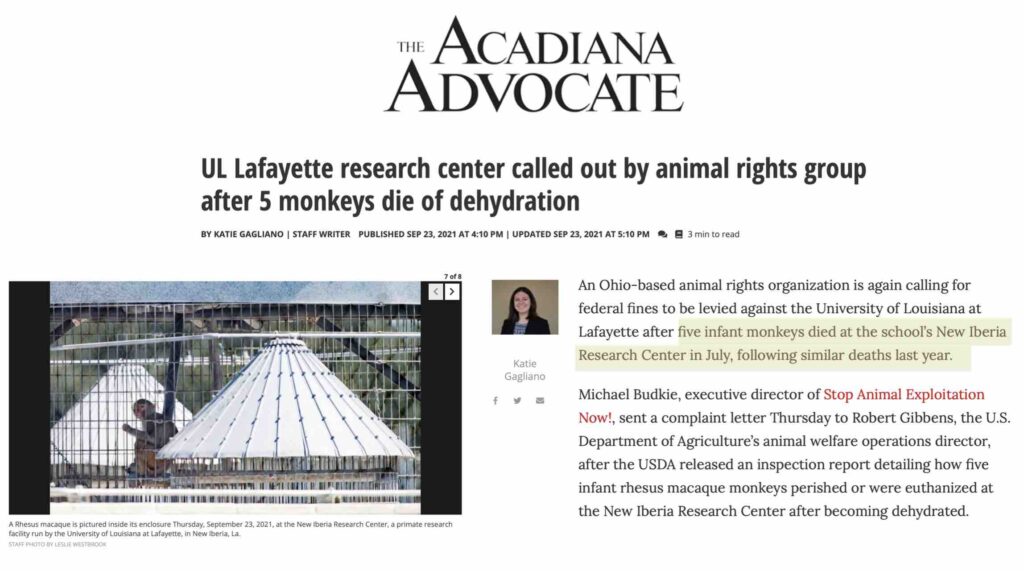 Among the NIRC chimps transferred to Project Chimps before the moratorium are Hercules and Leo, clients of the Nonhuman Rights Project (NhRP) made famous by the 2016 documentary film Unlocking The Cage. In 2015, a New York lab (which leased them to the NIRC) released them after years of legal pressure enforced by NhRP. To ensure a humane retreat for Hercules and Leo, NhRP arranged to transfer them from NIRC to Save The Chimps, a sanctuary in Florida where they would spend their days away. However, due to its exclusive contract with Project Chimps, the NIRC instead sent Hercules and Leo to the Georgia Shrine, where they spend most of the time in concrete rooms. Now, NhRP is engaged in yet another battle on behalf of Hercules and Leo – this time with HSUS. After HSUS privately dismissed concerns about their clients’ captivity at Project Chimps, NhRP took the unusual step of publicly calling on HSUS to provide Hercules and Leo with daily outside access.

The Nonhuman Rights Project (NhRP) and the Humane Society of the United States (HSUS) are engaged in a public battle over the fate of Hercules and Leo, NhRP clients languishing in concrete enclosures at Project facilities HSUS Chimps in Georgia.

Crystal Alba, a Project Chimps whistleblower who created a website to expose the abuse suffered at the facility, summed up the feelings of all advocates working on the effort to help these chimps: “For the sake of all chimpanzees – those waiting for sanctuary at NIRC and those already at Project Chimps, I hope HSUS addresses the most serious animal welfare issues by creating more outdoor habitats, hiring a trained veterinarian and providing the the comprehensive care these chimpanzees need to thrive in captivity. “